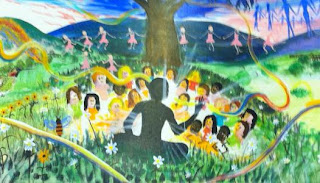 I was back this week doing some training for my good friends at Colgate University, one of the most mission-driven organizations I have worked with. They see their role as not just being an elite liberal-arts school (and having a great football team), but creating experiences in and out of the classroom that help students develop as leaders.

It was in this context that I was fascinated by this mural, which graced the wall above me as I led a workshop at their campus multicultural center. It appears to be a storyteller ("naw, it's a shaman" remarked my sweetie ...), bathed in light, with people gathered around him. In the far background, people are dancing.

What are the things you do best? What are you proudest of? What is the North Star that you move toward in life? I will bet these all revolve around things you were *taught*. Things you never knew before that captured your imagination, gave you new skills and powers, and perhaps even changed the direction of your life. Things that helped you learn to dance your own unique dance.

Storytellers have had a huge influence in my life. For example, I struggled in school when I was a child, actually getting put in a special private school by the time I was seven years old. (I'll bet I am the only Ivy League graduate you know who flunked third grade.) So what was different there? For one thing, they assigned me a "math nun" who taught me college-level matrix algebra in fourth grade – and then had me teach it to the fifth grade students. 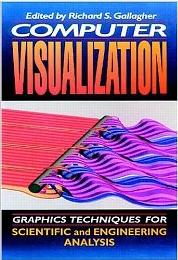 The simple act of teaching me a skill that few people knew – and then giving me a chance to show people I was great, not just bad – was life-changing for me. I later earned an engineering degree from Cornell and actually made a career of using matrix algebra for many years. In fact, those who know me as a communications skills author often have no idea that my first book was actually a book on 3D computer graphics that is knee-deep in matrix equations.

I have seen the same thing happen many times in other people's lives. The young person in trouble who discovers great skills in culinary school, and jumps from the fire into the frying pan. The person struggling with their job or their attitude, until someone takes them aside and says, "I see potential in you – try this." Or in a more famous example, Susan Boyle living a very ordinary life until someone asked her to open her mouth and sing.

Much of my current career as an author and public speaker revolves around telling stories that teach people new things, and hopefully giving them powers they never had before. People often tell me that they don't communicate well, react badly to others, or get flustered in difficult situations. Then I teach them different words to use, and pow! Problem solved. They didn't have to work harder, try more often, or change their personalities – in fact, those approaches have almost always failed them in the past. They just needed to listen to someone who knew something they didn't, take it in, and hopefully pass it on.

I would not be so arrogant as to compare myself with the person bathed in light in the picture above. Sometimes my stories lift people, and very often other people's stories lift me. In both cases the brightest moments of my life, now and I believe yet to come, spring from gatherings where stories are being told and new ideas are being shared.

So what stories do you have to share with people? What could you teach people that might lift them, give them new skills, or help them believe in themselves? And more important, what stories might be out there that might change your life?
Posted by Rich Gallagher, LMFT at 3:22 PM No comments:

There has been a lot of buzz lately about the book Battle Hymn of the Tiger Mother, where Chinese-American mother Amy Chua describes her no-holds-barred approach to raising her children: no sleepovers, no tolerance for less than A's and first place, and making one daughter practice a piano piece for hours with no water or bathroom breaks until she got it right. The media has now taken this book beyond one person's extreme approach to parenting, into a cultural commentary about how America is becoming a nation of coddled children who settle for being second best.

I am not going to join the chorus of people calling her a bad mother – that is between her and her daughters, at least one of whom publicly supports her. But what she describes goes against everything I have ever learned in family therapy, and for some of it (like the piano incident) some columnists are wondering what the social services folks think. And for whatever it is worth, my four siblings and I – all of whom became Ivy League graduates and successful adults – came from good parents who didn't scream at us when we got B's, block our social lives, or pressure us into activities we didn't want.

For that matter, my late father's parents were always trying to get him to loosen up and not be such a grind studying, and he ignored them and eventually became a university president – kind of like an early version of Michael J. Fox in Family Ties. If his parents had used Chua's approach and pushed him instead, what would he have done instead – lead two universities? Or perhaps lose his motivation entirely? I am not yet convinced that Chua's argument would hold water if you were to do a legitimate empirical study. Especially if you measured being happy and successful, versus just test scores and trophies.

But I have a deeper concern with books like this. Our society has become addicted to extreme solutions with no room for shades of grey. Whether Amy Chua intended it this way or not, she now joins the flamethrowers on cable news channels, the shock jocks on the radio, and the get-rich-quick hucksters on the business bookshelf. All of them make a great deal of money by putting out extreme views that people embrace as the next great hope.

Ultimately my concern isn't so much for Amy Chua's parenting skills. It is that her book is on the cover of Time magazine. Because it draws a lot more attention than things like supportive parenting, productive dialogue, political diversity, and moderation. In my opinion, the problem isn't with them, it is with us. When we put books like Chua's on the bestseller list (currently #4 on Amazon as I write this), we sacrifice more of our own humanity to the counsel of the loudest voices.

The road to civility doesn't make for good media buzz. This is why I rarely watch television unless there is an umpire on the screen somewhere, and do not purchase books like Amy Chua's. But if enough of us start changing the channel, we could honestly build a much more respectful world, where screaming parents and political extremists are off in the margins where they belong. Care to join me?
Posted by Rich Gallagher, LMFT at 3:33 PM No comments:

Thoughts on the Tucson shooting rampage

It has been very strange and unsettling for me to watch the news lately, as they keep showing pictures of the Safeway in Tucson where the horrible shooting that claimed the lives of six people and wounded Congresswoman Gabrielle Giffords took place. I have been a little more heartsick than usual watching all of this, not only because of the tragedy of this event, but the familiarity of it.

You see, my mother lives down the road from that Safeway in Tucson, where my family has called home since the 1970s. I have gone shopping in it on many a Saturday morning. It is one of the safest and friendliest neighborhoods you could imagine, in a beautiful setting surrounded by the Santa Catalina mountains. I have always thought that if there was a paradise on earth, this place was close to it. And now, just like that, it has suddenly become a place of horror.

Since then, there has been no lack of opinions on what happened. We've been hearing this incident turn into a forum on political vitriol, the death penalty, and what Obama and Palin said - or should have said. And we keep going back and forth about whose fault this situation ultimately was or wasn't.

My opinion is that perhaps we shouldn't be so quick to have an opinion. I would love nothing better than to see an end to the partisan ranting that passes for entertainment on today's cable news channels. It would be great to put an end to the politics of division. And I would welcome seeing society respect its elected officials. But sadly, I don't think any of that would prevent incidents like this.

The shooter was, by all accounts, a good kid who slid over time into severe mental illness. Of course, some mentally ill people become politically overinvested. And a few take out their grievances, real or imaginary, on people in public. I myself had a scary incident years ago, after a radio appearance in Rochester on a book I had written on corporate culture, where an obviously unbalanced man pushed toward me at a book signing that night ranting about corporate America, yelling a few inches from my face and poking at me. Thankfully I was whisked away by store security posthaste.

But I also don't think the context ultimately matters that much. When I visited Japan years ago, for example, I read about a man committing a murder who claimed that Buddha made him do it. If we are really going to prevent tragedies like these in the future, we need to rethink how we deal with serious mental illness. Because we could heal every single political rift in the nation, and next week someone might get shot at Disneyland by someone who is obsessed with Goofy.

When a member of Congress lies critically wounded, and we watch the funerals of people like an innocent 9 year old girl, feelings run very strongly. And for me, this incident strikes close to home – my mother could have been in that store. (For today, I am glad she is a Republican.) But right now, it is simply time for America to mourn the dead, and resolve to do a better job of treating the mentally ill.
Posted by Rich Gallagher, LMFT at 9:52 AM No comments: