Coming soon: What to Say to a Porcupine 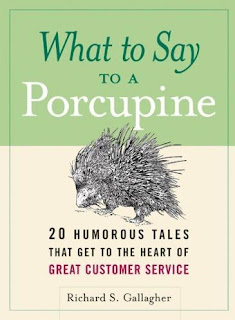 What do a demanding colony of porcupines, an upscale restaurant run by hyenas, and a famous medieval knight have in common? They are all part of one of the funniest books ever written on how to create excellent customer service! I am pleased to announce my next book What to Say to A Porcupine: 20 Humorous Tales That Get to the Heart of Great Customer Service.

Faithful to the format of Aesop’s Fables, Porcupine is a collection of 20 very hip, funny stories that teach real lessons about the mechanics of good customer support, aimed at the same audience as business fables like FISH! and Who Moved My Cheese.

Porcupine is scheduled for release late next quarter from leading business publisher AMACOM Books. For me, this project was a chance to combine a lot of things that have always been very close to my heart: great storytelling, real-world interpersonal and leadership skills, and even research on the structure of how classic fables made people smile over 2000 years ago.

The end product was truly a labor of love, and makes everyone laugh out loud. I can’t wait for all of you to see it. You can pre-order it now from Amazon, and my new website WhatToSayToAPorcupine.com will be coming soon. And keep an eye out for a summer tour with readings, book signings, and one of the funniest speaking engagements ever on customer service - more to come soon! 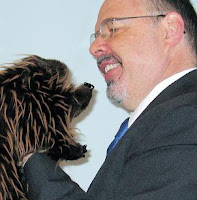 Posted by Rich Gallagher, LMFT at 5:38 PM No comments:

On becoming a musical anachronism

If you don't play a musical instrument, please feel free to skip to the next blog entry.

I love all sorts of music: jazz, R&B, indie alternative rock, you name it. And there is one common denominator to lots of my favorites: the minor-seventh chord. So many great songs that get my motor started have minor-seventh chord sequences - if you aren't musically inclined, here is a taste of what I am talking about:

So here's the problem: it seems that the minor-seventh chord has slowly disappeared off the face of the earth. Once in a great while it shows up in a new song (like the aforementioned "Smile" from 2006), and then when I look it up on the web they talk about how "retro" it is. When "Pacific Coast Party" came out, which I thought was one of the greatest songs on the face of the earth, one review said that it "sounded like every cop show theme from the 1970s."

Perhaps the last straw came in an interview last week from Joss Stone, the British songstress whose triple-platinum album The Soul Sessions gave me hope for the future - especially songs like "Super Duper Love", a gorgeous minor-seventh fest of old-school soul. Turns out she hated that album, complaining nowadays that the songs were written and produced "by guys 50 and up."

(Sigh) You got me there, Joss: I am 53. But first, do me a favor: go listen to a song like "Then You Can Tell Me Goodbye" by the Casinos. *That's* retro, OK? So stop picking on my minor-sevenths.

If I ever do an album, it's going to be entitled "Minor Seventh". And the way things are going these days, it's probably going to sell three copies.
Posted by Rich Gallagher, LMFT at 10:33 PM No comments: 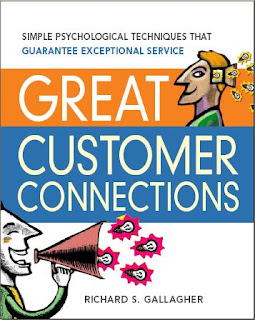 Just wanted to pass along some good news on my latest book Great Customer Connections: Simple Psychological Techniques that Guarantee Exceptional Service: it is suddenly a hit in cyberspace.

Amazon.com recently started its own line of e-books for use with its own Kindle reader, and the Kindle version of Great Customer Connections has consistently been their number 1 book on customer skills.

Specifically, this book generally has a sales rank in the top 10 or 20 in Amazon's "customer service" category, however the vast majority of these are books on service *strategy*, not how to deal with customers. In addition to being their top on-line seller for customer skills, I am pleased to see it holding its own among some of the real giants in the customer service field.

This comes on the heels of a strong release of the physical book version, where it reached the Amazon.com top 8000 (for all books!), was critically acclaimed in Business Week and the customer support trade press, and made a big splash overseas, where it became distributor McGraw-Hill's 26th top selling trade book.

There are approximately 10,000 published books on customer service, according to Amazon.com, but few dig deeply into the psychology of how we really handle customer situations. That's why Great Customer Connections has such great buzz among businesses nowadays, particularly customer contact operations - it's giving them a way to make real, measurable changes in their service performance.

Want to learn more about how you and your team can handle *any* customer situation successfully? Check out a free sample and audio clip at www.greatcustomerconnections.com, and join the crowd!
Posted by Rich Gallagher, LMFT at 10:02 PM No comments: