On Tooting Your Horn 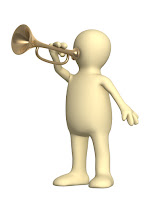 A little while ago, I ran into an old friend in town, and among other things she noted that I tended to toot my own horn on Facebook – in other words, that I often post about my speaking gigs, my books, or the good times I am having.

It was meant well, and taken as such. And she is completely accurate. But it raises a deeper issue that rarely gets explored: the differences between tooters and non-tooters. So I would like to take you inside the mind of a lifelong tooter, to put it in its proper perspective.

You see, for many people, this issue takes on moral overtones. Non-tooters often grow up believing that it is shallow and pretentious to brag about yourself; as one recent meme put it, “May your life be half as good as it seems on Facebook.” At the other end of the spectrum, tooters are at risk of seeing non-tooters as dullards who celebrate nothing and share nothing.

Neither of these stereotypes is accurate. So here is my attempt at brokering a truce between two equally valid worldviews. First, here are some of the reasons why I tend to toot my horn:

1) To me, tooting isn’t egotistical – it is epidemiological. Since the dawn of history, men were often hunters and gatherers who took care of their families. And when they stopped being able to do so, they died. This is how hunting trophies and harvest celebrations came about: they celebrated the successful pursuit of food and survival. So for thousands of years, tooting has been a celebration of life, and of still being in the hunt. Same thing when I celebrate my goals and pleasures – it isn’t about winning or being better than others, but rather about taking pride in the happy pursuit of a good life.

2) For me personally, there is almost a spiritual dimension to celebrating yourself. During the toughest times of my life, non-tooters had nothing to offer me. And it was always other tooters – people who openly liked themselves, and encouraged others – who saw potential in me and gave me hope. So I wanted to be like them, not like those who had nothing to say.

3) We tend to be attracted to our own species as friends. I really like the company of other tooters. For example, I have always delighted in seeing other people’s books, cheering on their launch campaigns, watching their videos, and hearing their stories. It is life-affirming for me to be in the company of other people who take joy in their own pursuits, and see possibilities for themselves and others.

4) Tooters make good tutors. Yesterday at a speaking engagement in Pittsburgh, one woman told me how much she enjoyed my talk (always a good thing to say to a tooter), and then confided that someday she would like to be a public speaker herself. I gladly sat down with her at lunch and opened my playbook about getting started in the business. More broadly, I love seeing other people learn, grow, and succeed. If you want to learn to become a writer, speaker, musician, or whatever, your best bet is to find a good tooter.

5) Finally, we are all the product of our own family histories. I come from a large family of high achievers, including a very professionally successful father, and a funny and often brash mother with a very healthy ego – and as I often told her, much of my own success came directly from what I learned from her. For me, as with her, taping my mouth shut about my life would feel like a dull grey existence.

Non-tooters often mistakenly believe that tooting is a reaction to covering up some deeper emptiness in your life. Not in my case. If you were to crack my head open, you would find a pretty happy guy inside most of the time. And if I am sharing good things publicly, this is a very good sign that I am in my normal happy place. When things are tough for me, I am much more likely to withdraw then blather on.

Now, a word to you non-tooters: you’re OK too. You have perfectly good and valid reasons for being the way you are, based on who you are and what you have learned in your life. And there are healthy and unhealthy extremes to both your personalities and mine. Tooters can be friendly and engaging, or egotistical boors. Non-tooters can be kind and modest, or wet blankets. It goes without saying that we should always try to be our very best selves and make other people feel good.

But above all, we all have to be true to who we are. We all have our own unique personalities and gifts. And living someone else’s life is never a prescription for happiness. So if you are like me, toot away!
Posted by Rich Gallagher, LMFT at 7:09 PM 5 comments:

The only political blog I will write all year – 2016 edition

In this most unusual of election years, we have a communications skills expert’s nightmare: one of the most divisive races in modern history, fueled by non-stop partisan talk radio, cable TV and social media.

I am pretty apolitical on the best of days, but this year in particular, the electoral process makes me feel the same way most women would probably feel if Bikini Babes of NASCAR was blaring on their TV 24/7. But people still do ask me to weigh in about politics, and while I wouldn't dream of telling you how to vote, I do have some thoughts about how to best approach this election. Here they are:

Use the outrage test. I have a simple rule for whether an issue should concern me: is the outrage bipartisan? If not, then it isn’t allowed to take up valuable space in my head. This simple rule automatically exempts me from Benghazi, Melenia Trump’s speech, Hilary’s emails, Trump steaks, and a whole host of other issues.

This is particularly true when (only) one side is going, “Oh, OH! Let’s investigate! Let's litigate! Let's prosecute!” When I hear people talk about jailing Hilary or blocking Trump from candidate security briefings, all I can do is roll my eyes and mutter to myself, “Holy 1998 impeachment, Batman.” Because these faux issues won’t give anyone a good job, improve our well-being or stop violence.

Real issues like the economy, health care, racial justice and the police, and terrorism raise strong opinions from both sides – and even if they disagree, it’s game on. But if one side is outraged and you are hearing crickets from the other side, move along.

Choose your sources. Do you form your political opinions – or worse, express them – through Facebook memes or partisan sources? Let me make a gentle suggestion. See what a more neutral source has to say first before you contribute to the political discourse. You might be surprised to learn that people actually do exaggerate things and distort facts – even in politics.

If you can’t do that, and reject the mainstream media the way many good zealots do, fine. At least do me this favor: check out the memes and articles that the other side is posting first. Then imagine that all of you were locked in a room, and couldn’t emerge until you reached consensus. What do you think the consensus might be? At least let that inform your posts and opinions.

Everyone criticizes commentators on the other side for doing it – but when I notice the same things with pundits on their side, people look at me like I have three heads. Yet they too are polarizing people and spreading half-truths. My gentle suggestion: don’t listen to jerks just because they are “our” jerk.

Listen to the other side. This is the most important advice one could give for this or any election – learn how the other side thinks. Listen to their candidates. Read their articles. Visit their social media pages. Because real problems are solved through dialogue and consensus. And that can only happen when both sides “get” each other first.

If you can’t frame the other person’s position as that of a totally reasonable person, you aren’t yet capable of advocating effectively for your side – you are limited to preaching to your own choir. Which, in my humble opinion, never changes anything.

This is especially true in this unusual election, where it seems like the more we vilify the opposition candidate, the more their poll numbers go up. I hope that when the dust settles on the 2016 campaign, its legacy is that we finally learn to listen to each other and solve problems together.
Posted by Rich Gallagher, LMFT at 3:15 PM 2 comments: