Thoughts from a Curaçao cab 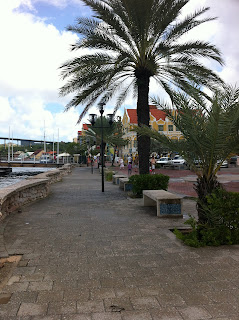 Public speaking has taken me a lot of places. This week it took Colleen and I to Curaçao, a Caribbean island off the coast of South America, where I did the opening keynote for the Tree Care Industry Association’s 2012 Winter Management Conference.

Aside from teaching a couple hundred or so of my best friends what to say to a porcupine, I had a rare couple of days free to explore this beautiful island and do what I love best – speak with new people. Often from the inside of a cab. And frankly, I think everyone should look at life the same way a Curaçao cab driver does. Here are some of the things I learned from them this week:

Enjoy the moment. I always ask cab drivers anywhere how their day is going. In Curaçao, a typical answer was a broad smile, a sweep of the hand pointing to the sky, and the response, “Great – the sun is shining!”

When I used to live in Los Angeles, where it was pretty darn sunny most of the time, most people wouldn’t respond to “how are you” by even noticing the sun. Instead, they would talk about their jobs, their bursitis, or their ex-wives. I much prefer the way they think in Curaçao, stopping to savor the moment.

Life is about relationships. One cabbie in particular seemingly stopped every ten seconds in crowded downtown Willemstad to honk and wave at people he knew, and later made a quick stop at its Floating Market to buy Venezuelan grapes the size of plums for his mother (“she’ll be happy in a few minutes.”) How often does that happen in most places? Whether we are cabbies or computer programmers, too many of us (present company included) live in a cocoon instead of connecting with others.

There is always tomorrow. One driver leaned out the window to talk with a colleague who was about to board a ferry, smiling and joking with each other in their native Papiamento language. He then explained that his friend’s cab had been in the shop all week waiting for a part, putting his livelihood on hold, but that he was enjoying the time off and the great weather in the meantime. So how did I react last week when my own “cab” (e.g. my computer) crashed, and my consulting projects were held up? Certainly not by putting myself on “island time.” I’ve still got a lot to learn here.

It isn’t just about us. Whatever you might think about organized religion, a surprising number of Curaçao cabbies – as well as our Dutch tour guide – volunteered that they read the Bible every day, and that it guided their life. We had some fascinating discussions on what Jesus actually said, especially about forgiving people, starting over, and never judging others. I totally respect anyone’s religion or lack thereof, but it was refreshing to listen to so many people who “get” the difference between being righteous and self-righteous.

Now that I am back home, I realize it is time to trade the warmth and relaxation of Curaçao for the speed my life normally runs at. And it is a great life indeed. But I tip my hat to a lot of good people who charmed me this week, and am going to try and carry a little more of the islands inside me from here.

Posted by Rich Gallagher, LMFT at 9:23 AM No comments: