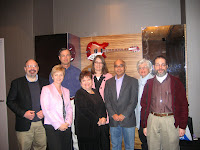 The world just lost a truly incredible person this past month. Dr. Ron Davis, a lifelong public health crusader who was most recently president of the American Medical Association, lost a very courageous and public battle with pancreatic cancer at the young age of 52.
I first “met” Ron as part of a teleconference discussing a National Cancer Institute monograph that I was working on as a science writer, a publication series that he was once editor of, and was struck immediately by how high his standards were. Not knowing him beyond this phone call at first, I imagined him as a demanding perfectionist. Later, meeting and working with him in person for several days in Chicago (he is the tall man in the blue shirt on the left), I discovered these high standards were combined with a warm and accessible man who was described accurately by his colleagues as “the nicest person in the world.”
During that meeting last year, he shared with us that he had just been elected president of AMA, and while he probably had the smallest personal ego of any person ever to hold that office, his pride was unmistakable. He clearly relished the opportunity to have a soapbox for the next year as an advocate for the nation’s health, and used it skillfully.
For those of you who don’t know Dr. Davis’s legacy, he was one of the world’s foremost experts on tobacco control, who founded its main professional journal of the same name, and played a key role in public health interventions that have saved tens of millions of premature deaths. As AMA’s president, it was Dr. Davis who delivered their formal apology to black physicians for their past exclusion, tirelessly advocated for better public health (at one point delivering an hour-long lecture from on a treadmill), and set the medical industry further on a path toward universal health care coverage.
On a personal level, it was a treat to listen to someone with Ron’s rare blend of expertise and humility, and I cherished the opportunity. For example, one night at dinner at a Chicago bistro, I started having trouble breathing after eating my appetizer – an issue that would later be diagnosed as food allergies – and started to panic. I soon recovered my bearings again without anyone being the wiser, but remembered my only thought being, “Oh no – I am having a medical crisis and I am sitting next to the president of AMA. What do I do now?” But above all, it was a pleasure working with a truly great man.
Perhaps his greatest final act was making us all part of his illness and its lessons. He shared a very detailed summary of his treatment with friends and colleagues on a blog, encouraged people at risk to have genetic testing for this illness, and kept up a full schedule of speaking and publishing. As his illness advanced, he appeared before the AMA for one speech – now bald from chemotherapy – and spoke in a calm, clear voice that “Our existence, compared with the history of the earth, is quite fleeting. So whether we are ill or well, we should not waste any of that time before figuring out how to leave our mark on this planet.”
Just two weeks before his passing, he still tried to chair a medical conference in his native Detroit, and when the gravity of his condition prevented it, he dictated a message to his colleagues that read in part, “Some of you remember me as a young medical student just beginning my journey. That energetic medical student committed to public health is still a part of me ... You have designated me as a leader, but I tell you honestly that in many ways you have led me. Your concerns and your friendship have guided me through the years. Now I must complete my “circle of life” and go with God.” Vaya con Dios, Dr. Davis.
Posted by Rich Gallagher, LMFT at 11:04 PM No comments:

Just a quick note - I was very pleased to get word this weekend that What to Say to a Porcupine is going to be published in a Korean edition in 2009 through CREDU, an educational division of the Samsung Group.

My books have been published in six languages so far, but this one means a lot to me. Even as an English-language book it has been very popular in Asia so far - for example, this week it is one of the top 15 business humor books in Japan on Amazon, as well as #21 on the customer service chart - and globally, it has been a top 10 business humor book throughout the English-speaking world.

So I'd like to say hwan-yŏng-ham-ni-da (a special welcome) to all of my new friends in Korea! And, of course, looking forward to teaching you all what to say to a porcupine.
Posted by Rich Gallagher, LMFT at 12:45 AM No comments:

Last week was very special for me – my latest book What to Say to a Porcupine became the number 2 selling customer service book in the United States on Amazon.com, as well as one of the top 10 business humor books worldwide, following a record-setting webcast sponsored by Supportindustry.com and Parature Software that drew nearly 500 people! Thanks to everyone who attended and purchased the book.
Now I’d like to return the favor by making the same offer we made to people who attended my webcast last week: purchase a copy of What to Say to a Porcupine on Amazon.com (click here to order), and receive a complimentary mini-course that will help you use this book as a training tool in your organization.
Featuring student and leaders guides, a PowerPoint presentation, and an electronic copy of one of the book’s fables, you will have all you need to turn your next team meeting into a fun and productive learning event. To get your free copy, simply forward your Amazon.com receipt to info@whattosaytoaporcupine.com.
P.S. If you missed the webcast, tune in anytime to the archived presentation at http://www.parature.com/res_webinars.aspx. Enjoy!
Posted by Rich Gallagher, LMFT at 4:14 PM No comments: