Think back to when you were nine years old, and your mother told you to behave better. Did you listen with rapt attention? Did you run off full of enthusiasm to improve yourself? Perhaps most important, did you actually change your behavior?

The reason that you answered "no" to all of these questions holds the key for how to breathe new life into your customer service training. When you stop telling people how to behave and start stirring their creative juices instead, there is no limit on how far they will lead you.

Most of us immediately get defensive and self protective when someone tells *us* to improve – no matter how quote-unquote correct the other person is – because this is a basic survival instinct we all share. But when we hear a story about someone else's foibles, we listen and learn from it. This is because of a well-known principle of behavioral psychology known as "modeling," which holds that we primarily learn by observing other people.

This principle lies at the root of how we started telling stories. Over 2500 years ago, Aesop's fables were created to teach people life lessons, in the form of funny stories about animals and people. A generation ago, Popeye cartoons helped children to want to eat their spinach. And today, approaches such as narrative psychotherapy help people examine their own life stories and make positive changes.

So how does this apply to your own customer contact team? Simple. Stop telling them what to do better, and get them to work scripting stories about how other people handle customer situations. You'll be amazed at how much energy and creativity they will have in doing something all of us do extremely well: stick our nose in other people's problems and try to solve them.

Nowadays, when I teach a customer skills course, I often follow a three-step process. I share a humorous fable about a customer situation, teach some of the skills that these characters could use to make the situation better, and then turn everyone loose to complete stories of their own. Here are some examples:

1) Once upon a time, there was a fire-breathing dragon who was rude, demanding, and angry– and if anyone ever dared to stand up to him, tongues of fire would shoot from his mouth! But this dragon was also very sad and lonely. No one ever wanted to talk with a fire-breathing dragon, and people would cower behind their desks and counters whenever he came in to buy anything. So one day, you came to the village and said, "I have a great idea for how to deal with this dragon in the future! My idea is ______________"

3) Take the worst customer experience you have ever had. Turn the person who waited on you into a fictional character, and then write your own fable about how this character learned to do things better. Have fun!

This last exercise is particularly important, because no one wants to hear about improving their own attitude or courtesy, but when they start examining bad experiences from the other side of the counter – and put their problem-solving skills to work – a valuable learning moment takes place. So try using stories yourself to put the creativity of your own team front and center in your training. Soon you will find that story time isn't just for grade school anymore, and more important, you will watch your performance soar.
Posted by Rich Gallagher, LMFT at 9:41 PM No comments:

What to Say to a Porcupine: A global hit! 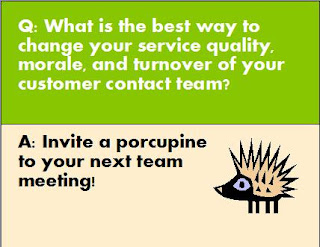 It has now been a little over a month since the release of What to Say to a Porcupine, particularly in overseas markets, and I am proud to report that this week it reached the top 10 on Amazon's business humor list in the United Kingdom. This combines with a top 20 showing on the US business humor list, and rave reviews from thought leaders in industry.

For example, the influential Peppers and Rogers Group recently noted on their blog that "With a fairly high chuckles-to-learning ratio, Porcupine is easily one of the more charming business books out there at the moment," and 1-800-CEO-READ declared that "This book is great for any company that needs a little kick-start or even a reminder of how customer service should be like. It's thought-provoking in a very interesting way! I hope when you get a copy - or even copies for your whole staff - you'll enjoy it!"

Also, this week marked the first live training program for What to Say to a Porcupine, and it garnered rave reviews from everyone who attended. Here are just a few of the comments:

"I've attended and taught customer service techniques in many settings, and Rich is a vast recourse with fresh, genuine information! Let's do this program over and over - what a great avenue down the path of success!"

"Acknowledging, validating, and paraphrasing customers' feelings are my new goals and mantra"

"Rich Gallagher is an excellent facilitator, and the workshop was fun and enlightening."

"I would recommend this workshop to anyone who is a customer service representative."

This book - and training program - was designed from the ground up to dramatically change your team's customer skills, using the latest principles of human communications, in the most fun and enjoyable way possible. In the near future, a companion training kit (see the postcard above) will be released and promoted nationwide. And of course, I am delighted to come speak and train for your team - and guarantee you will never look at prickly customers the same way again!

To nibble a nosh for free, visit WhatToSayToAPorcupine.com for a downloadable sample chapter, and stay tuned for a free mini-course in the very near future. Enjoy!
Posted by Rich Gallagher, LMFT at 11:45 AM No comments:

Thoughts on the Beijing Olympics

It has been fascinating to watch this year's Beijing Olympics so far - not only the games themselves, but the spectacular opening ceremony and the media run-up about what it is like in modern China today.

Whatever you may think about China politically, it will always have a warm spot personally in both my heart and my family's history. Not long after China first took its first tentative steps toward the West with ping-pong diplomacy and Richard Nixon's visit over a quarter century ago, my late father was part of one of the first US scientific delegations to China, and soon afterward I took a sabbatic from my software job to teach at a Chinese university as part of World Bank development project.

As someone who grew up during the Cold War hearing about the evils of Communism, I went behind the Iron Curtain with a mix of excitement and trepidation - after all, this was a country that sent many academics off to forced labor during the Cultural Revolution, and still denounced my homeland as a bunch of imperialists - and the trepidation part didn't get any better my first morning in Beijing (Peking back then), flinging back the drapes of my hotel room and seeing a massive sea of people in identical "Mao suits" commuting to work on their bicycles.

At the same time, it was tremendously exciting to be part of what I felt was a wave of history. To go in the first place, we had to undergo a lengthy approval process from both governments and study State Department briefing materials. And to stay there, particularly as a visiting professor, I had to show a great deal of respect for a country that was very different from our own. Except for the occasional faint BBC broadcast on my shortwave radio, it was an immersion in a totally different culture.

This trip was one of the most incredible experiences of my life, and it reaffirmed the obvious but often unappreciated fact that people are people everywhere. Our hosts could not have been more gracious, people came up to us frequently to get to know us and practice their English (even at times grasping at my clothes to see what I wore), and we could not step on a bus without every Chinese soldier jumping to his feet and insisting that Colleen take his seat. Most important, I got to know a great many Chinese as warm, welcoming people who cared about us at a personal level.

My sabbatic was a flurry of lectures, meetings, impromptu tourism, and a different way of life. For example, we were packed off in tour vans every Wednesday because power was shut off at the university, our laundry was laid out to dry on a grass courtyard by old Chinese ladies, and one afternoon I even watched brand new IBM PCs being loaded off a horse-drawn cart. But what I will remember most were the people who treated us like old friends, and were as curious about us as we were about them.

Perhaps my fondest memory was my "Elvis Presley" lecture. Every morning they taped my classes, and played Western elevator music on the cassette recorder beforehand thinking it would make me feel at home. One day I decided to show them what real American music was like, and brought a cassette of Heartbreak Hotel. As I explained the lyrics and the vagaries of American romance gone bad, everyone burst out laughing, particularly as I described Elvis and wiggled my hips to demonstrate.

Afterward they wanted a tape of my music, and I agreed on one condition - that they give me a tape of their favorite music in return. What I got was a tape of the sweetest, most poignant Chinese opera I have ever heard, with the admonition that "whenever you listen to this, to always remember your friends in China." Today this music, and memory, still brings a lump to my throat.

Nowadays as I watch the Olympics, I barely recognize a country that now has five-star hotels, gourmet food, and a growing middle class that drives cars, buys houses, and uses their credit cards like we do. A country that is now one of the largest markets for McDonalds and Buicks. A country whose energy and talents, in my mind, transcend whatever geopolitics are talked about on television. And above all, a country with many people I consider friends. I wish them a great Games.
Posted by Rich Gallagher, LMFT at 8:00 PM No comments: