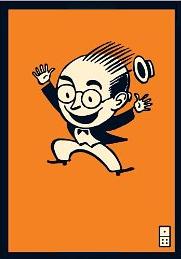 Near the beginning of the movie "Ice Age," a turtle decides to try an evolutionary experiment: he hurls himself off a cliff exclaiming, "I can fly-y-y," before landing with a resounding thud on the back of his shell.

I got thinking about that turtle yesterday while I was reading Seth Godin's new bestseller Poke the Box. It's a short book with an even shorter premise: start things. People who "poke the box" are people who go for it instead of waiting for permission.

It's a compelling argument. But then, a little later, I read a NY Times article about a 70 year old woman in California who continues to work because she has no savings, despite a long professional career. Why? According to her, she kept plowing her money into business ventures that never succeeded enough to sustain her today. Was she poking the box too?

Same thing is true in the job jungle. Godin makes a good case that being an instigator in the workplace is better than being a sheep. So why is it, when I look back over most places I've worked, that the foot soldiers generally have stable careers while many managers – e.g. the instigators and box-pokers – frequently get whacked? I've seen so many bright people lose their jobs as companies keep looking for better quarterly numbers, a "new direction," or the latest leadership flavor of the month.

It's an interesting juxtaposition. Poke or not poke? Lead or follow? Start or wait? Succeed big, or keep ending up like the turtle?

I think part of the answer lies in the difference between initiative and risk. Let's face it, stories about risk-takers are inspirational. They sell books. But most truly successful people I know are actually pretty risk-averse. They become really good at something, often over a period of years. They test the waters instead of just taking flying leaps. They poke the box when the time is right, but they also know the difference between being brave and stupid.

I also believe that poking the box isn't for everyone (and suspect that Seth agrees). There are lots of good people out there who would probably be better off being great followers than mediocre leaders. Pushing them otherwise would be like trying to start a rock group composed of people who hate rock and roll.

Still, Godin makes a good point, as he usually does. Now I feel like going out and poking a few boxes.
Posted by Rich Gallagher, LMFT at 7:03 PM