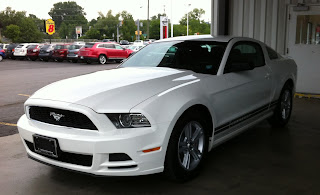 Many years ago, after purchasing a vehicle, one of my co-workers sourly observed, "You'll never get rich buying new cars."

But actually, he was wrong. Years later, when I was starting my consulting business, getting a new car - at a time when I had no income whatsoever - turned out to be one of the smartest financial moves I ever made. And perhaps one of the smartest moves YOU could make too. Allow me to explain.

Here's the backstory. In 1996, after a pretty good first year as a consultant, everything came to a very hard stop. All of my projects and clients turned into a pumpkin at nearly the same time, and my income came to a screeching halt. From there, I couldn't get myself arrested. Three months later, adding insult to injury, my wheezy old car with six figures on the odometer needed major repairs.

With my tail between my legs, I went to my local dealer to try and trade for a passable used car while I got back on my feet again. Instead, the salesperson wheeled out one of the most gorgeous vehicles I'd ever seen - a brand-new, full size car with metallic paint, a sunroof, and a premium stereo system. And explained how leasing it for two years would only put a small amount of my assets at risk.

His numbers actually made sense. And so I will never forget the feeling of having had no income in three months, no idea when I would ever work again, and driving off the lot in the nicest car I had ever owned.

Here is why it actually made good financial sense. Every time I got behind the wheel of this beautiful car, I FELT like a successful person. And ACTED like a successful person. Which made a real, tangible difference as I started knocking on doors, lining up gigs and clients, and planning my future. Soon I was back in business again, and I proudly paid that car off early and kept it for seven years.

Think about it. If you are selling your ideas or services to someone, what would give you your best chance of succeeding: feeling hot, sweaty, and dirty, or feeling freshly showered and clean in a nice suit? Either feeling transmits itself to other people, and the same thing is true for the rest of your self-image. And what they perceive, in turn, ultimately governs your success.

So I am not suggesting that you start taking stupid risks, or drive your cash flow into the ground. But I do want you to rethink what the hair-shirt types often tell you about scrimping and sacrificing in the early stages of your business. What works for them frankly wouldn't have worked for me - and I feel strongly that you should do whatever will make YOU most successful.

Nearly two decades later, I still drive around in a nice car, because I firmly believe that how you FEEL and how you ACT are major determinants of success. (My current ride is pictured above.) So whatever it takes to make you feel awesome - and then share that awesomeness with the world - seriously consider it as part of your business plan. Invest in yourself and your self-image, and I believe the rewards will often come back to you many times over.
Posted by Rich Gallagher, LMFT at 5:59 PM

Great guiding words! I believe there's a lot of truth to that. It's strange how the smallest things even in just decorating a living room or cleaning a cluttered space can change a mood, thought pattern, outlook, making someone a more positive person. Success starts with the person believing in themselves. I can't say I have fully implemented that style, but now I know for sure.