What does going on a diet have to do with communications skills? Bear with me for a moment, and I'll explain.

Earlier this summer I decided to go on a diet, with a goal of losing 25 pounds and getting back to my high school weight. I am now halfway there, as the before-and-after pics below show. But how I got there struck me as having a lot in common with how we communicate in difficult situations.

You see, most diets involve depriving yourself. Instead of having burgers and fries, you eat things like carrot sticks, skim milk, and thin gruel. And then after a week or a month of this kind of dietary torture, you go off the wagon and balloon back to your previous weight. This is what happened to me last year when I tried a commercial diet plan, I did great as long as I followed the plan, except that I stopped following the plan.

So this year I am doing things a little differently. Breakfast is my favorite meal of the day, so I am having the most scrumptious breakfast I could imagine – hot oatmeal with milk, raisins, and a big dollop of whipped cream. Yum! Most people don't realize that a big spoonful of whipped cream is only about 40 calories, or about as many calories as I spend scratching my nose.

That yummy breakfast leaves me feeling full, and more than happy to have big salads and small portions the rest of the day. Best of all, I don't feel deprived at all. To the contrary, I feel like I am eating better and enjoying my food more than ever before. Which leads me to how we communicate with people.

When we aren't happy about something, we usually lead with the verbal equivalent of the carrot sticks. We take corrective action, hold people accountable, tell people to get with the program, yada, yada, yada. And we usually get about as far as I did last year on my diet. Because – surprise – no one lays awake at night rapturously pondering your "corrective action."

I say break out the whipped cream. Find out what motivates the other person and help them get there. So when someone is coming in late too often, for example, put it in the context of how they can develop as a leader, not how they can avoid getting written up for disciplinary action. When you use a strength-based approach built around incentives, I find that people's resistance to change melts away as fast as my pounds do.

Think critically about all of the people you have ever worked with who had behavioral issues on the job. Did any of them ever change in the long term because of pressure and disciplinary action? I don't know about you, but in my quarter-century-plus career, those few people who really turned it around did so as a result of someone believing in them, and getting them to believe in themselves. Everyone else - the ones who were simply "held accountable" – either stayed the same or got canned eventually.

My next book for AMACOM, entitled How to Tell Anyone Anything: Breakthrough Techniques for Handling Difficult Conversations at Work, explores the mechanics of this approach in detail, along with its roots in the growing field of strength-based psychology. If you'd like to be part of my advance team as a potential reviewer, drop me a line at info –at- howtotellanyoneanything.com. This is going to be a very exciting book release.

So with a dozen or so pounds to go, I'm stocking up on more whipped cream. Now, what do you plan to say to someone the next time you want them to improve? 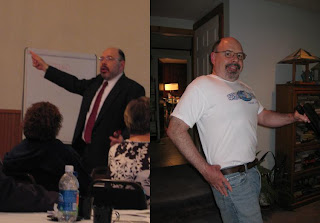 Sucking in, yes, but also 12 pounds lighter that that guy on the left :). 12 more to go, just in time for my New Years resolutions. Then I can call myself "svelte." Take care!