Why I am not donating to Cornell this year 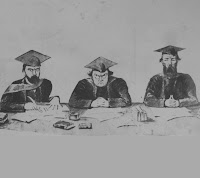 This afternoon, I received a phone call from my alma mater Cornell University that was a textbook example of how *not* to ask for a donation.

The first part of the call was typical of college fundraising drives: verifying my contact information, asking if I'd been on campus recently (yes, giving a talk at the Engineering School on becoming an author), and checking to see if I wanted to be connected to any resources on campus (no thanks). So far, so good.

Then we got to the fun part. I was asked to donate an amount roughly equivalent to my annual mortgage. Umm, no thanks. Then I told the telemarketer politely how much I did plan to give - a much smaller sum - and she paused, raised her voice, and said, "REALLY?"

No, not really: I hung up at that point. Something I almost never, ever do with people. She then called back to complain that I "misunderstood" her taunting and should still donate, but no apology of course, and I hung up again. Yeesh.

Ironically, I do donate a healthy sum to charity every year for organizations involved in issues like world hunger and mission work. But it frankly isn't Cornell's business why I favor them over an alma mater with a $5.5B endowment at the moment. Giving is a very personal decision for all of us. And no one has permission to hassle me about where these donations go, even if some sales trainer is teaching them to be more "aggressive."

It's not like I don't understand the economics of a university. My late father was president of our hockey rival Clarkson University, and doubled their endowment during his tenure. He worked hard to cultivate a network of supporters, many of whom benefited from a steady stream of Clarkson graduates. But it would be hard to picture him browbeating individual working alumni over the size of their donations. Especially when you never know how the "long tail" of smaller contributors might respond later in life, when they are richer or doing their estate planning.

Meanwhile, there is a communications skills lesson for all of us here: if you think you can shame paying customers into doing your bidding, think again. As for Cornell, my check for them just went to a local mental health agency, and we'll see how it goes next year. If they're a lot nicer to me.
Posted by Rich Gallagher, LMFT at 11:35 AM

everyone is afraid of being dissed, and sure won't accept it if it's their money. Phone technology of course allows one to say "goodbye a-hole" fast. We've got so little purpose and power that we've got to hang on what little is left.